The Joy of The First Ascent

On Monday 31st October I did the first ascent of a 40m F8b+ route called "Un Chateau dans le Ciel". This was only the second time I made a first ascent and the the first time I have done one at my home crag "Baderne" in Burghundy, France. It made me proud.

So I arrived just over a week earlier and met up with a friend Denis Roy who is a local climber, and one of the main developers of the Baderne crag. He told me he had bolted a route there that would be good for me to try. He said it was long, steep, and physical with a boulder problem crux at the end. I was curious to have a look. He said that he wasn't sure of the grade but that it felt harder than F8b. 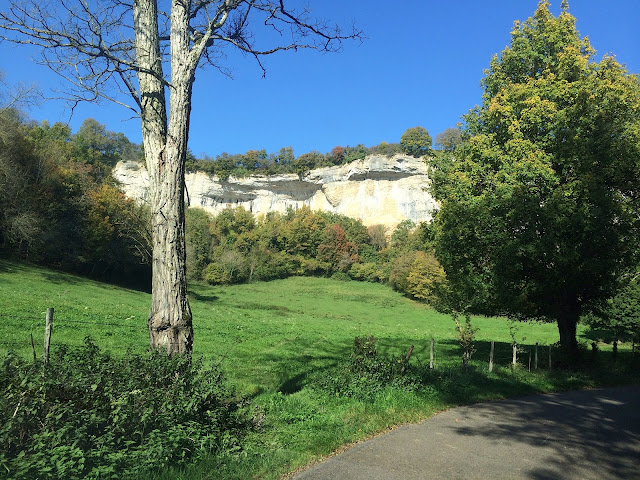 
On the first day at the crag I had a quick warm up on a F7b and then got straight onto the project. I really enjoyed the movement on the route, there were lots of the kinds of ingredients l like to climb on. It started with a slabby section moving into a technical crimpy section, followed by the roof with a jump to gain a ramp full of big crossthroughs then into the headwall boulder problem crux to the finish. 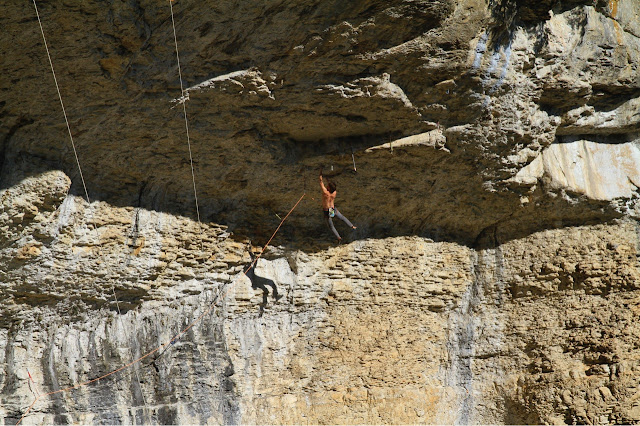 Catching the Jump in the Roof Section
©Chon 2016


I did all the moves on my first time on it and they felt good, and most importantly I really enjoyed the climbing. I knew before I got back to the ground that it was doable for me and I wanted it. It was game on. It felt for sure like it was harder than F8b but not F8c in my opinion. 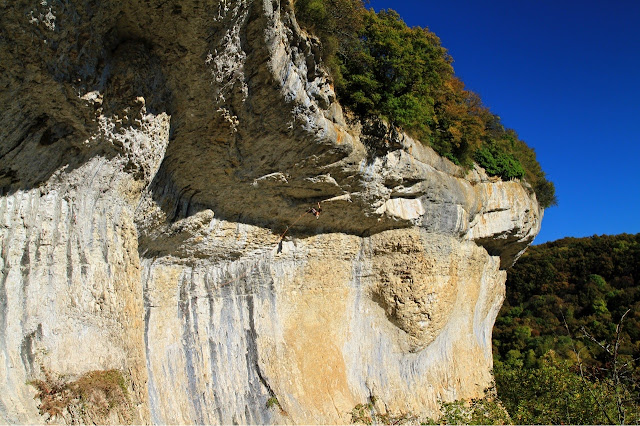 
I had only ever done one other first ascent before on a 7b+ called "French Connection UK" that I bolted on Portland, Dorset in the UK 10 years ago, so it was pretty exciting to get the chance to try something of this calibre and at my home crag too. I was psyched. 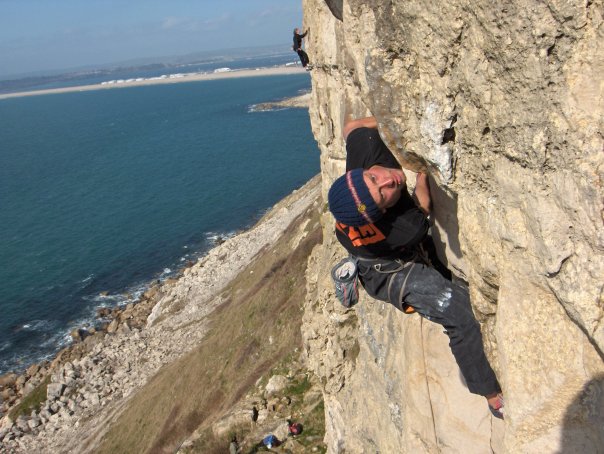 
I repeatedly fell at the boulder problem crux just before the anchor. I started feeling a bit of pressure as it wasn't going down as quick as I thought it would. Day 5 and day 6 were tense because I knew I could do it but it hadn't happened and I had to get back to London in a few days time. Up to the crux was already F8b in my opinion and I needed something a bit extra to get me though the boulder problem. At the end of day 6 I refined my beta for the crux boulder at the top and found a variation on a mono in a bad sidepull flake and instead of going deep into the mono I crimped the edge of it and got more contact with more fingers. Day 7 and I tried the new beta and sent the route on my first go of the day, by the skin of my teeth!! 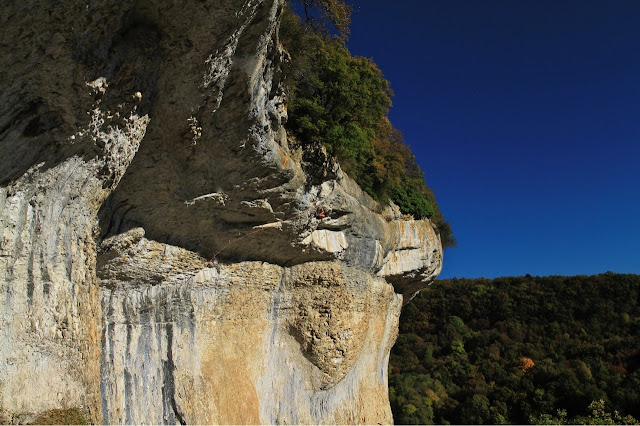 Moving towards the Crux Boulder Section just before the finish.
©Chon 2016

This year as well as F8c, I have climber 5 F8b's in 3 different countries and all varied in style. None of them took longer than 2 days. So with this experience I decided to grade the route at F8b+. The name "Un Chateau dans le Ciel" which translates in English as "A Castle in the Sky", was given to the route by Denis Roy as he bolted it and cleaned it.

I want to say a huge thank you to Denis for bolting and cleaning the route and mostly for giving me this beautiful opportunity for the first ascent.