So I'm back from one of my most enyoyable trips so far. I turned 30 and I spent it in Spain and at one of my all time favourite crags, Oliana. Late last year Evie wanted to plan something special for my 30th birthday this Feb. So she asked me if there was one place that I could wish to go back to where would it be? It didn't take long to say Oliana. 10mins later she booked our flights and we were going to leave on Monday 15th Feb, the day of my birthday :) 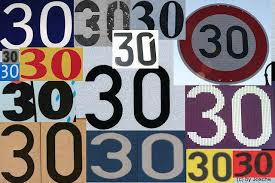 We would have left earlier, like the Friday before but I was setting for the "Telegraph Outdoor Show - SuperBloc Bouldering Comp" in London, and the comp was that weekend. The comp went really well, the setting team was great. We had a perfect split for the podiums. One of my favourite problems I set was the female final problem that you had to do a cat-like jump over to another volume. Hats off to Michaela for her power to do it statically! My problem got one top from Shauna, which is great from a setting perspective because it splits the group. 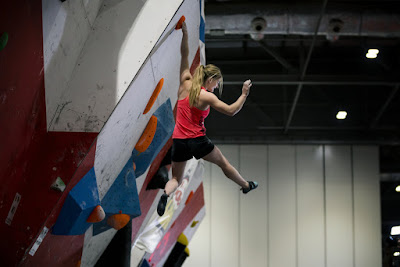 Shauna with the only Top on my Female Finals Problem. © Chris Prescott

Here is a nice write up on the event on UKClimbing..... http://www.ukclimbing.com/news/item.php?id=70260

The next morning was my birthday and it was on to Oliana. I booked an apartment right in Oliana so every day it only took 10mins to get to the crag. The weather was perfect every day and we were sharing the crag with some amazing climbers, Chris Sharma, Dave Graham, Danial Woods, Klemen Becan, Said Belhaj, Matty Hong and a lot more great Climbers. I have to say, for them I am nobody but they are all so friendly and fun. They are great ambassadors to the sport.

Then on to Barcelona. I was booked for some setting at Chris Sharma's new wall in Barcelona, and luckily it fell within one of the weeks I was already in Spain! The wall is awesome and I got to set with house setter Roque who is such a cool guy. We set a mixture of blocs over two areas in a variety of grades. 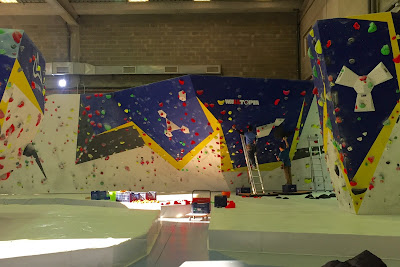 
The feedback was great form the blocs and it felt awesome to have so many amazing climbers on my problems and liking them. :) They were in town for the PETZL party the following weekend at Sharmaclimbing BCN. 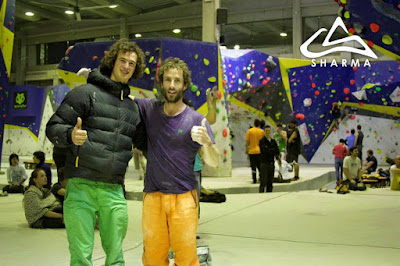 Getting the Thumbs Up from Ondra and Usobiaga was Awesome

Back to the crag and back to business. I started making good progress on my project, Fish Eye. Evie and I climbed every day without a break, in the sun, happy. I wish this was my life! We also bumped into old an old French friend from London, Nicolas, who runs the Abella Eco Refugio and he invited us to dinner one night. This is a really nice place to stay and it was awesome to hang out with other psyched climbers. Thanks for the hospitality, we recommend going to stay there.... http://abellaclimb.com/  He also took some great pictures..... 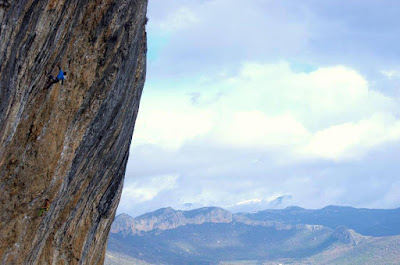 Evie had to go home after just one week for Emily and to work, and my good friend Tom (the fairy) came out. Lots more climbing and the links on the project were getting better. We also did a day at Terradettes and I climbed "Occident" f7c second go after punting off the last move on the onsight warm up, and "Primera Linea" f7c+ onsight.

Then on Thursday we went to the PETZL party at Chris's wall. His wife Jimena put us on the guest list which was really kind. We got there a bit early because we wanted to make sure we got parking. All the PETZL athletes had just finished setting and were about to start testing. Chris asked if I would like to test with them...! Hell yeah...! It was so surreal to be climbing with so many of my heros and they were all so down to earth and friendly. "Surreal" was the best work to describe it, all these faces I'd seen in climbing videos when I started climbing, and here I was testing with them. I'm not a punter but next to these guys I felt like I felt when I stated climbing, but that didn't matter, the vibe was great. The party after was so much fun with Dave Graham on the decs and we didn't get home until 2am. No surprise, we didn't climb the next day. 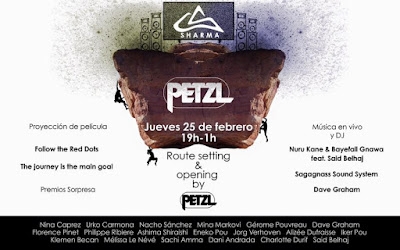 So back home now and full on back at the setting, I've actually hardly been home! I set the BMC Open youth last week up in Liverpool and this week is the Boulder Brighton 3rd Birthday Party Comp. Its always a fun comp so if you're not heading up to CWIF come to Brighton :). The weekend after is setting the BMC Youth Climbing Series with Gaz and Evie and White Spider.

Hope to see you somewhere along the way!