It’s been a wile since my last post, the comp season is well under way witch is why I have been working quite hard and not had so much time, but I use this occasion of the od day off to try write about it.

I’ll start of by the British Bouldering Championship that took place this year in Sheffield at the Climbing Works.
We had quiet a big setting team, with Percy Bishton, Jamie Cassidy, Andy Long, Rob Napier (chief), Roan and myself.
As usual with those guys it’s pretty simple, we started setting the finals by covering the Comp wall with volumes, and setting our problems.
My Final bloc was for men, problem 3, was a technical jump on triangle volumes.
Then, after stripping those, we set the semi’s. My bloc was for men also, a steep powerful, but also technical problem, starting on 2 big slopers and a tricky knee bar in between followed by some crimps to  a big jumpy slap and a more press move to  finish.
The next day, we set the qualifiers. The wall was a bit too short, so Longy and Percy built an extended bit of wall to the slab!
I set again for the men, two similar powerful and tricky problems on steep walls, and a balance problem for woman on the slab. 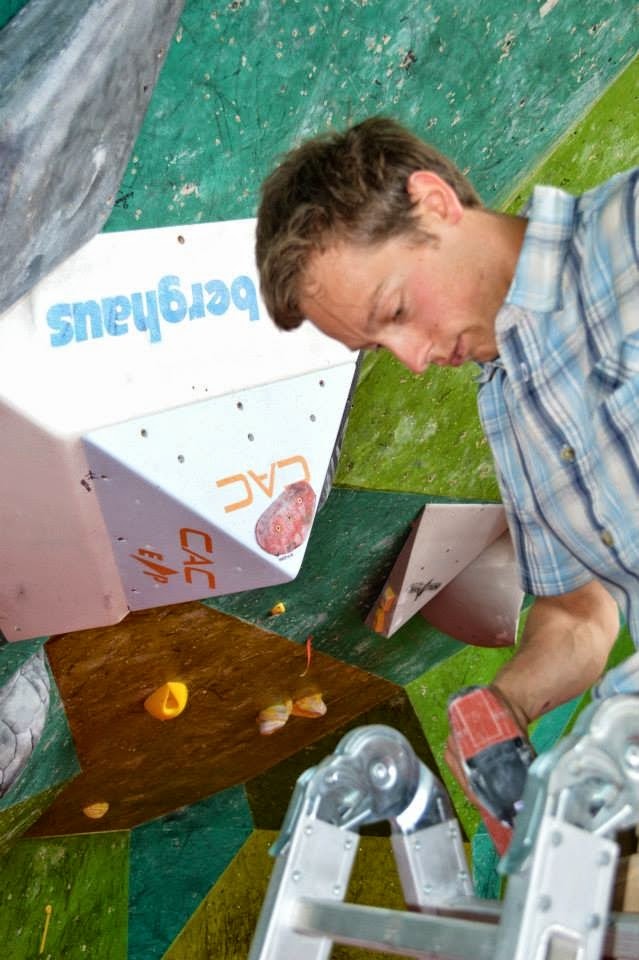 The actual comp went very well in a sweaty atmosphere, as it was very hot under the glass roof, but every problems topped apart from one and a perfect split ! Big well done to Michaela Tracy for winning the woman and Dave Barrans for the men.

The next big event for me after that was the IFSC lead world cup in Briancon.
I used to live there , I started climbing there and it was so exiting to go back to set this event.
It was also very exiting to be part of the legend setting team such as, Adam Pustelnik, Jan Zbranek (the chief) and Paul Dewilde. 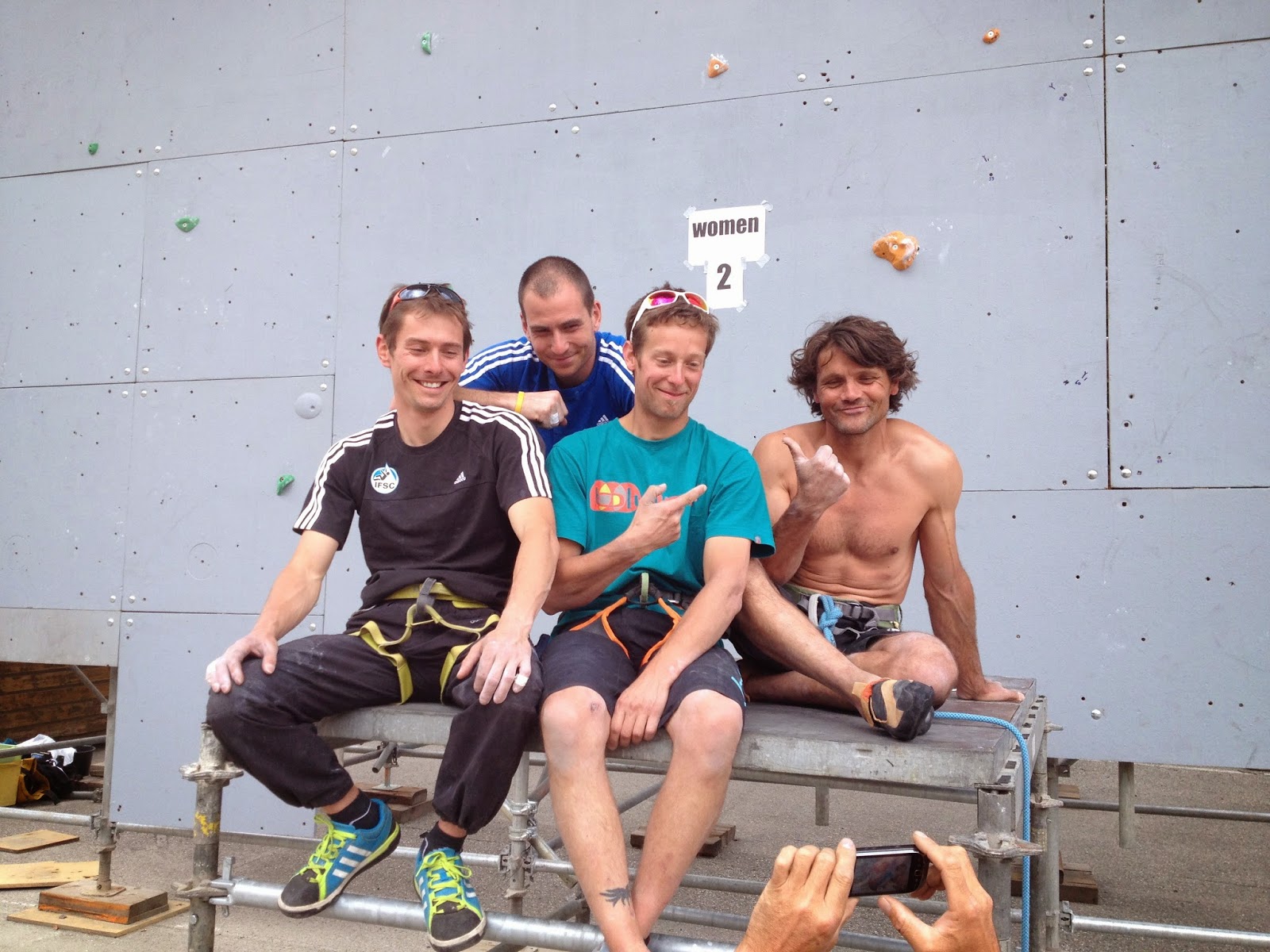 The Briancon World Cup Setting Team (from left) Adam, Jan, me and Paul

It was actually the 25th anniversary of the Mondial De L’escalade whitch used to be held in Serre Chevalier a few years ago. This event before becoming a World Cup only a few years ago was a legendary international climbing competition. 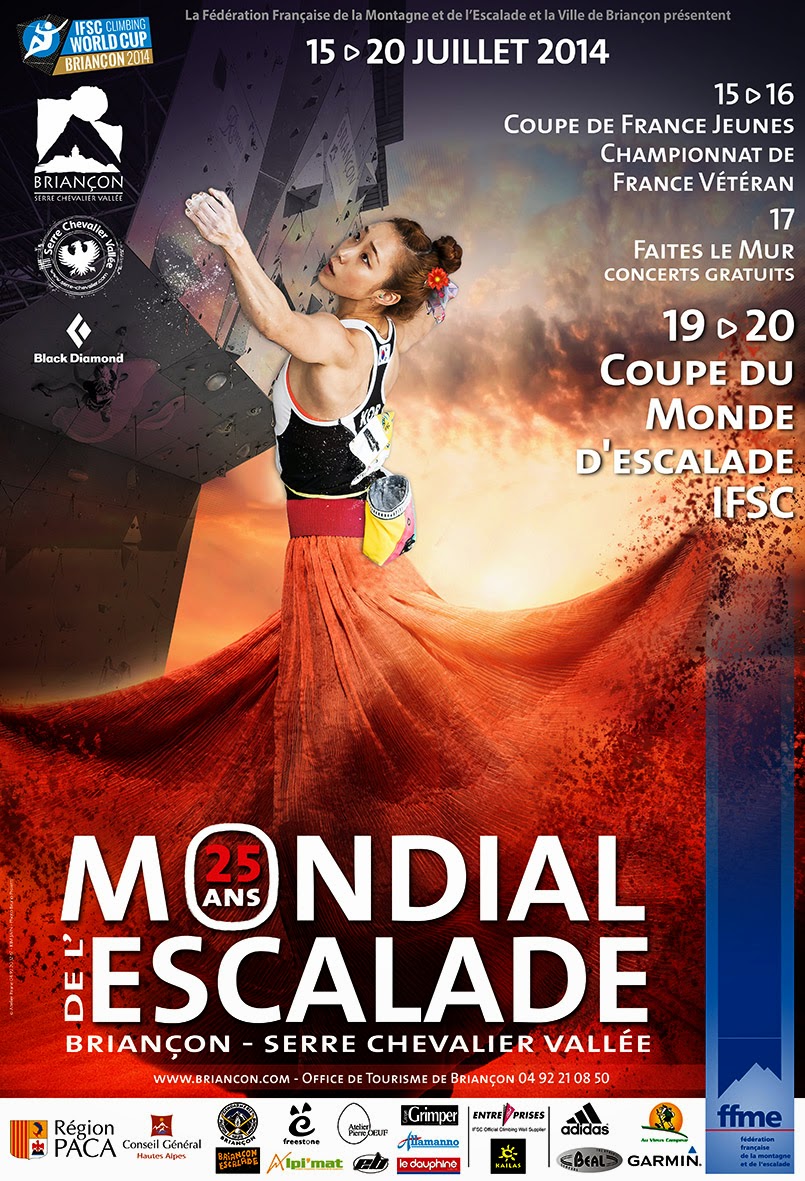 I teamed up with Jan to set the Men lead final, Adam and Paul teamed up to set the Woman lead final.
It was very flattering to get so much responsibility from Jan, Adam and Paul whitch got me so psyched! The route was really fun, with a really cool start standing up on a stalactite fixed to the stage and jumping to a huge volume fixed to the wall, then some more normal climbing but still really fun moves to lead to a big sideway dyno to finish. 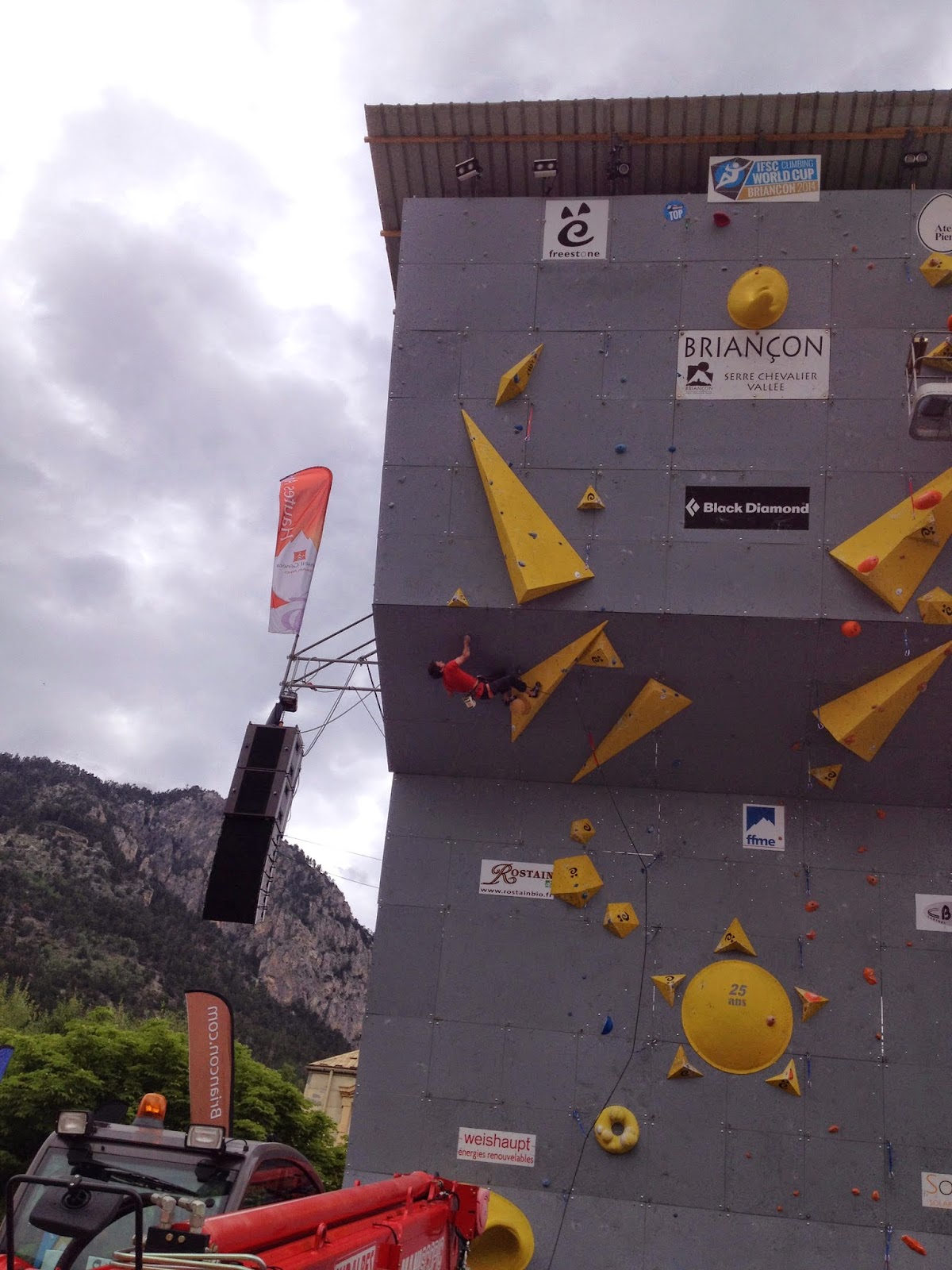 After finishing setting them we started testing and tweaking. When we finished with that we switch the teams on the other route to get more opinions on the moves and make sure we got the right level.
Day two, we spent more time testing the final to be sure just before stripping them ready to set the Semi’s.
I teamed up with Paul to set the Men one , Jan and Adam went on the Women one.
Again a really fun route with a crimpy steady start leading to a more boulder finish on some beautiful perfectly round slopers witch we made us named the route after Pamella ;-)! 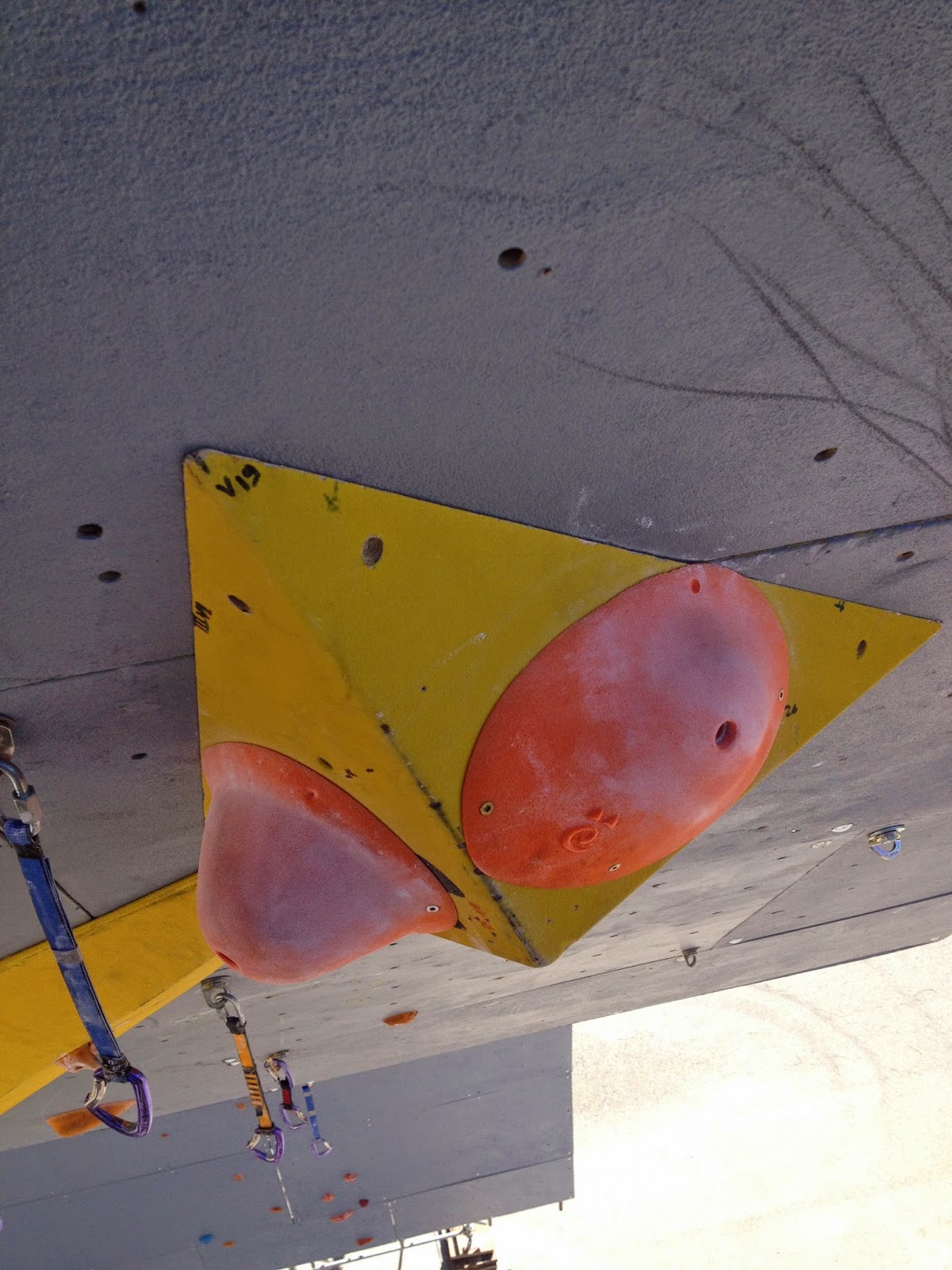 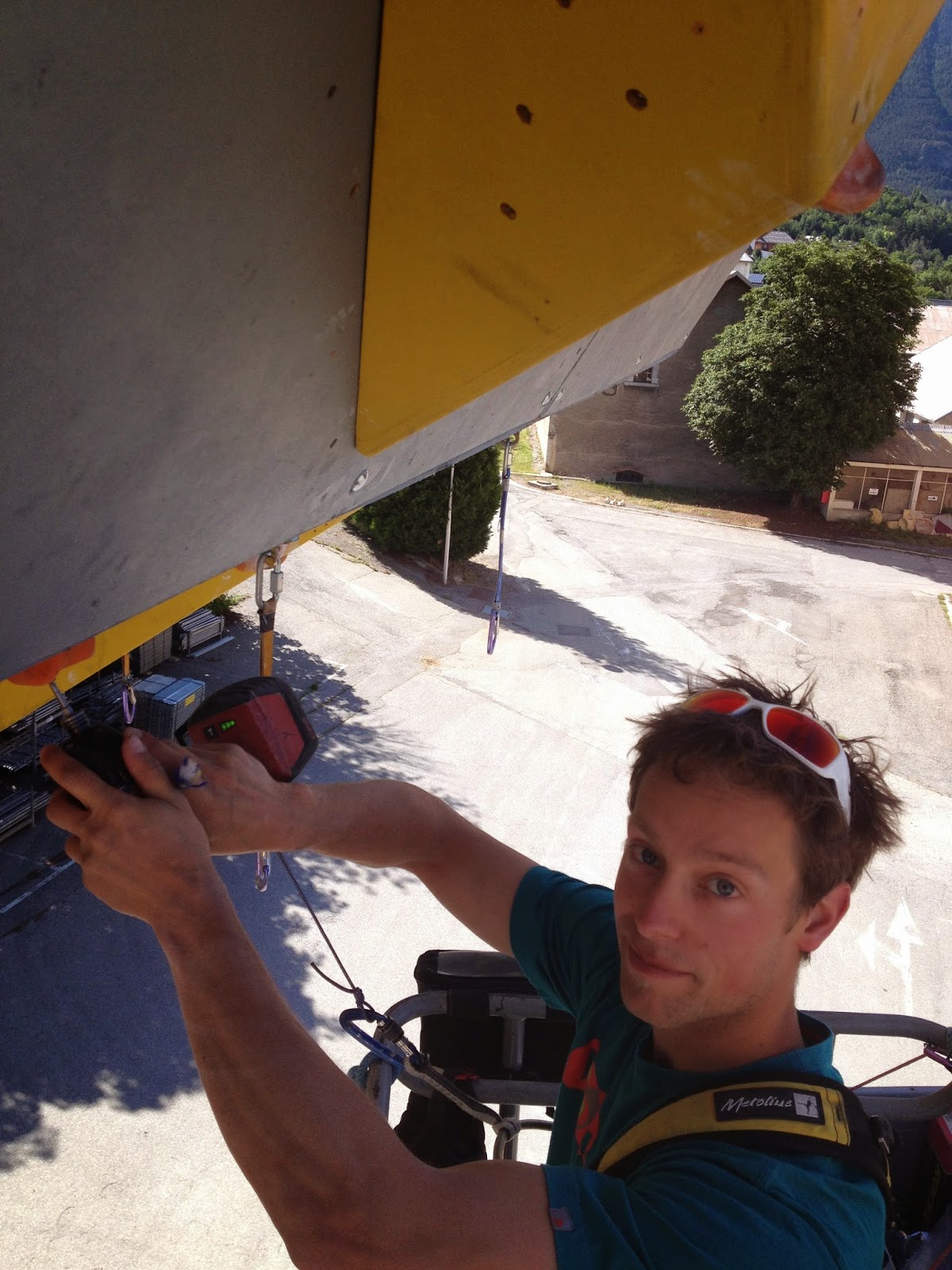 Pamella on the left and me setting on the right.

For setting the qualifiers, it worked out perfect with a team of 4, we set one route each and I choose to set set woman quail 2.

Two weeks separated the setting to the actual comp, so I stayed around Briancon for a few days of climbing with my friend Sam before going back to London for some more setting. 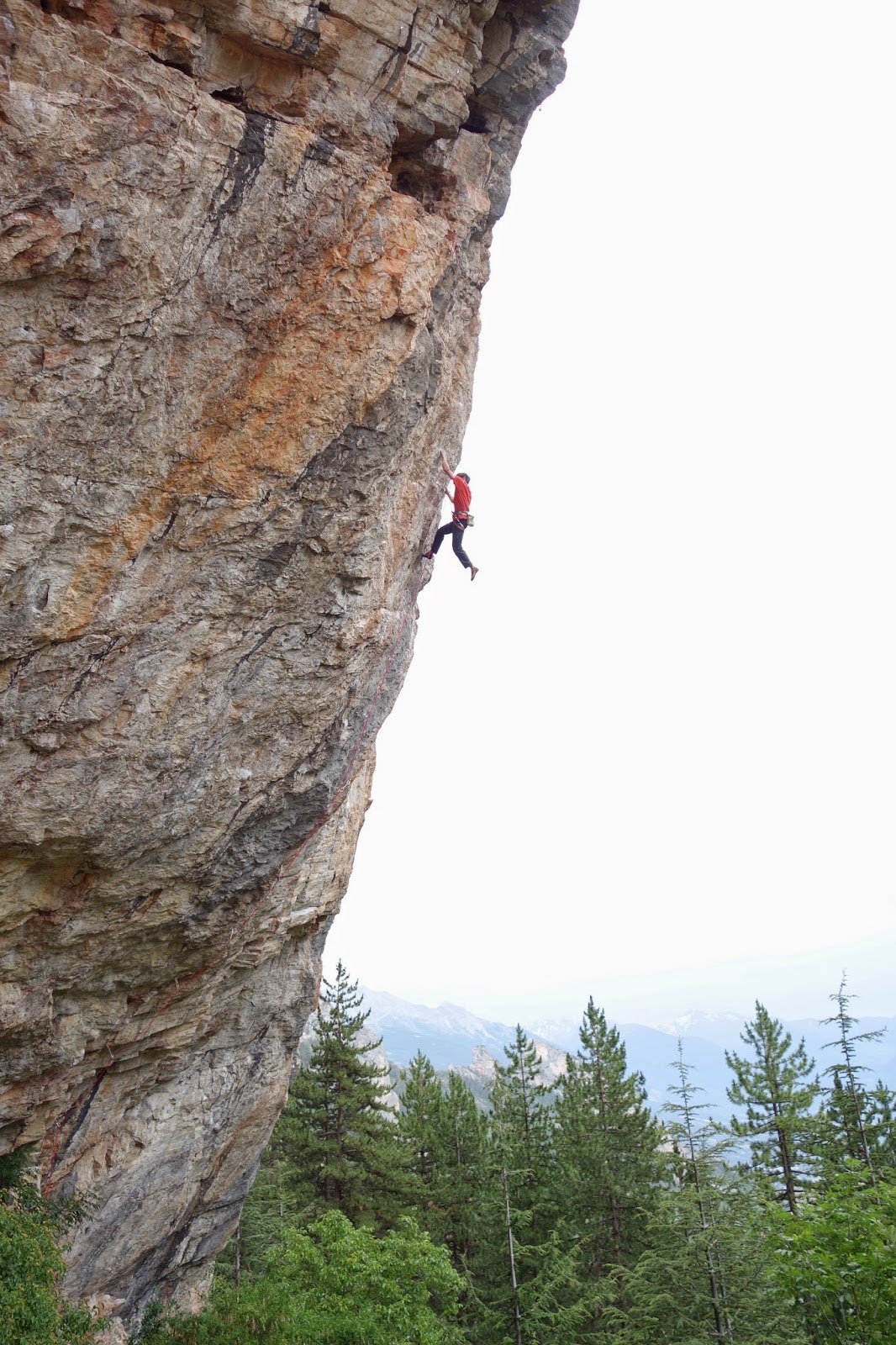 An 8a route in the vallee of Fressiniere.


I came back to Briancon for the comp dates with my dad, witch made me really happy and proud to show him my work.

The comp started of pretty good but maybe on the hard side with the qualifiers, so we decided to tweak the semi’s a little easier on the first half of the route.
Due to a bad weather forecast for the next morning when the semi’s should have been on, the IFSC decided to move them to the evening of the quali’s witch gave us not so much time to do the changes on the routes.
Luckly, we managed to stay on schedule and the semi’s went amazingly , with a really good crowed and atmosphere witch felt just like a final!
The next day, we had all day until the evening to reset and adjust the finals.
Lot’s of tweak and testing again as we really wanted a top on both routes and a to make really good show.
Unfortunately, the bad weather forecast came back with a really bad storm. The finals had to be cancelled!

Here is a little video link of the storm:
http://youtu.be/LUQ-WXdmdzQ 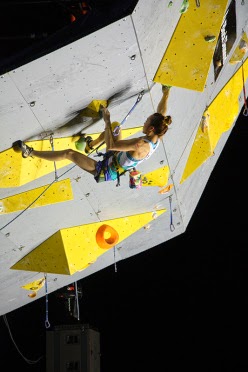 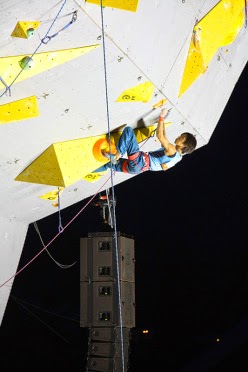