Hi everyone,
I have just been to Magic Wood for the first time with Evie and Emily. I heard so much about this “Magic” place that we had to see it for ourselves. 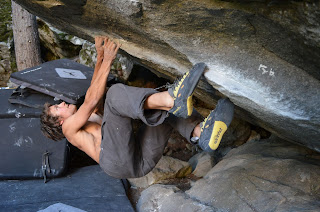 Yann on "Octopussy" 8a
As you all know, It’s been pretty hot recently and I wasn’t too sure if this boulder trip was such a good idea as we were driving down, melting in the van! Finaly, after a day and a half of driving, “we have reached destination” on a late Sunday afternoon, parked up, paid in advance for the “road-site”, sorry I meant “camp-site” (!!!) and as expected, no way we were going to sleep without at least touching some of those rocks! So we grabbed our pads quickly and as we crossed the famous little bridge and I was instantly relieved about my main worry, “the HEAT”. I can now see why they call this “Magic” Wood. It was cool. 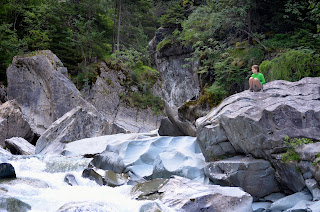 Emily Sitting by the River at Magic Wood
The next day we set of for a full day of boulder after Jetboilling a few eggs for breakfast.
Couple of warm ups later, Evie sends very quickly a font 7a+ called “Freiwild”! I was impressed, a big slap to a sloper, that’s my girl! 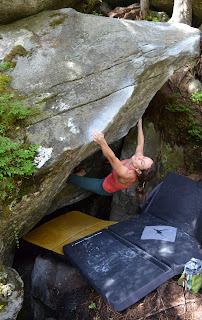 Then we headed to the bloc “Octopussy” for me to have a look. I have never climbed a proper font 8a before apart from an 8a traverse in Zillertal witch wasn’t a real one in my eyes. After quickly figuring out all the moves, I am now ready for a try but get stopped by a patch of sun right on the crucial sloper :( Oh well, maybe next session.

After that, it was Emily’s turn to climb too! She got her compression fridge project with a brave pop to the top :) 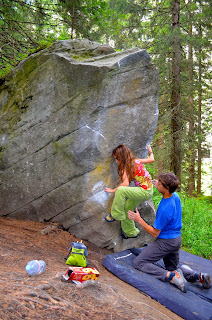 Emily on her project
A day and some swimming in the river later, we return to “Octopussy”. Some desperate tries and always the bloody heel keeps coming off!!! Then it just clicked to me, move your heel hook a couple of centimetres to the right, and that was it, “hey presto”. 4 tries later and I send, really happy. 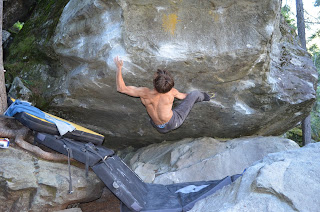 Yann on "Octopussy" 8a
I also climbed a lot of other easier classics, just to name a couple: “Supernova” 7c, “Grit deluxe” font 7a+/b (flash)… Evie did her favourite bloc of the trip "Panzerknacker" 7a. 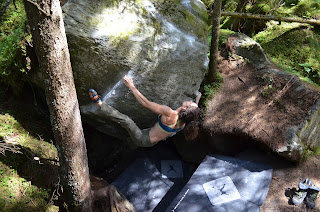 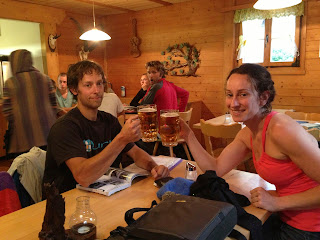